This is yet another area that QemuPPC falls on it's face, a disk image is faster than a Ram Disk.

darthnvader wrote:This is yet another area that QemuPPC falls on it's face, a disk image is faster than a Ram Disk.

Right, that's because QEMU doesn't (yet?) have a paravirtualised driver and instead relies on the much slower device emulation - see Cat_7's comment at http://www.emaculation.com/forum/viewto ... 725#p56308.

If you've got any MacOS development experience (unlike me) then this would be a great project to work on that would give a significant improvement in emulation speed.
Top

That said, I found that playing with caching enabled me to speed up the device emulation significantly from the default. I believe enabling writethrough to a block device on an SSD was what gave me the best performance.
Top

adespoton wrote:That said, I found that playing with caching enabled me to speed up the device emulation significantly from the default. I believe enabling writethrough to a block device on an SSD was what gave me the best performance.

That's strange because writethrough effectively means executing a sync or equivalent for each individual transfer to ensure it hits the disk before returning rather than relying on the OS to commit batches of transfers asynchronously. Can you provide the command lines and benchmark results (including information about the host OS) to demonstrate the differences you are seeing?
Top

I'm going to run some tests in writethrough, writeback, none and unsafe modes; I think it's possible that I meant writeback when I said writethrough, and I set things back to writethrough after the fact to be safe. But nothing beats hard numbers.

Writeback: 80% (looks like it was writethrough; these numbers sound familiar to me)

Odd set of results, but this is what I got. I suppose I could try it with a different image; this was mounting a custom-sized sparsebundle and accessing it as a block device. Reading directly from disk images seems to be slower.

In my environment, the host device is a local block device on an SSD, so the host-side operations are ludicrously faster than the guest-side operations. That said, direct I/O is taking approximately twice as long as synchronous I/O for me for some reason.
Top

Eeek that is really old. There have been so many optimisations since then (including switch to proper async macio emulation, reduced locking, TCG performance improvements etc.) I'd try repeating one of your tests with 2.9 and seeing how that compares. So much happens in a short space of time in QEMU

But that build is the first that had vga, sungem and pmu support

Is there a 2.9 build currently that supports VGA, Sungem and PMU? I use all three

But the vga driver is now very close to being included in the main code.
I'll create new builds when that has happened.

Well, I'll try testing 2.9 tonight without vga, if I can get it working with 9.2.2. Ran out of time last night to get it working.
Top

No way for me to test OS 9 disk I/O without being able to boot to it; the August build with VGA is the latest I've been able to get working for that.
Top

No idea what could be going on at your end. I just compiled from current source and I can boot both 9.22 CD and hard disk installation.

Hmm; I'll re-compile by hand then; I used the brew install for a quick check.
Top 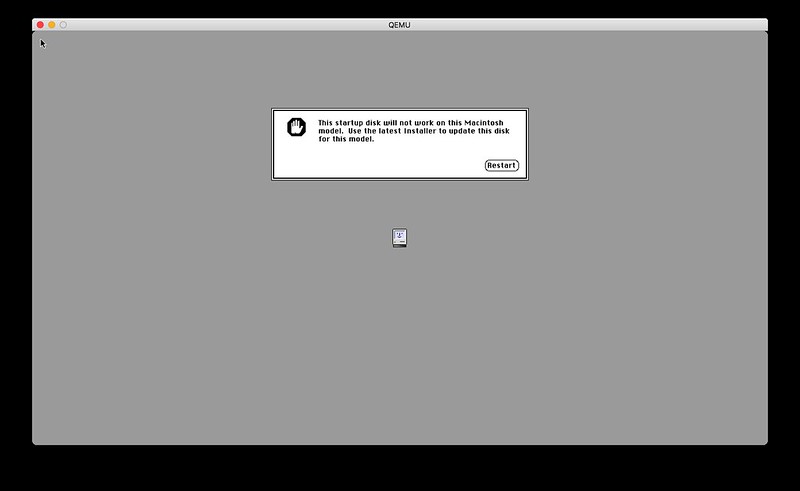 This is my standard image that works just fine with the same flags using the August 2016 build instead of 2.90.
Top

This is my standard image that works just fine with the same flags using the August 2016 build instead of 2.90.

Right, but presumably you were running the old release with -M mac99p to enable VGA/sungem which is a different QEMU machine (read: different virtual hardware) and so the drivers from your *mac99p* install probably won't match the hardware from the default *mac99* machine.

I suspect you'll have to do a fresh install from the ISO in order to run a benchmark, however last time I did a full install of OS 9.2 it was just under 10 mins on 5 year old hardware so it won't be too onerous.
Top

Thanks! I knew I was missing something. I forgot about using mac99p on those. I'll get back to configuration/speed tests once I link to a different image (I think I've got one set up already somewhere that should work)
Top

Thanks for the testing, that's a lot closer to what I was expecting

According to the latest patches on the mailing list, there should be more goodies in the next release with reducing locking on both disk I/O and display updates in the pipeline which will enhance performance even further.
Top

Any idea why the move from 2.8-ish to 2.9 doubled my read/write times and prevented block mounts completely?
Top

Regarding the inability to mount block devices that's not something I've seen here, so it could be a bug specific to Mac. Can you post a reproducer so that someone else with a Mac can confirm the issue? With a test case it's also possible to raise the issue upstream if required.
Top

Hm, didn't adespoton mean the opposite? He wrote that read/write times were doubled, not read/write speed.
Top

I'm not sure. However in every benchmark tool I've ever used, 100% represents the speed of what you are comparing against so 160% means an increase in performance of 60% etc. which should match with the recent improvments in QEMU. Or is this tool different somehow?
Top

In MacBench, I thought that the disk percentages had to do with write times (smaller being better) and then that all got applied against the overall benchmark score where larger was better. However, reviewing the screens, it appears this may not be the case.

In which case, it's kind of odd that writeback performance is higher than straight passthrough isn't it? Or is the caching actually helping things with small reads and writes somehow?
Top

Good question. Generally the write* options will get passed to the OS as option flags when opening the backing file. Perhaps using an SSD helps narrow the gap here because writes are fast? I'm also not sure what effect sparse bundles vs. a raw partition would have either.

Effectively the option flags for the write caching are passed through to the kernel so you're at the mercy of the Darwin kernel as to how exactly it interprets those flags (sadly I don't believe Apple publish their kernel sources anymore).

The reports I've heard suggest that writing to qcow2 images is faster than raw images since QEMU's disk layer can cache the writes for subsequent reads itself and sync asynchronously, although I should add this is second-hand information and not something I've directly tested myself.
Top

If the information over here is true, the kernel sources can be found at:
https://opensource.apple.com/source/xnu/

EDIT:
Actually, if you go to https://opensource.apple.com/ and click on the desired macOS version, you can scroll to the bottom and find the corresponding XNU (Darwin) version. You can also access it by clicking on it there.
Top
Post Reply
25 posts • Page 1 of 1