This was referenced in another topic on the board, and I don't recall it having its own topic, so here's a link:

Executor was a commercially available Mac emulator in the 90s - what makes it different from other Mac emulators is that it doesn't need a ROM file or any original Apple software to run; rather, it attempts to re-implement the classic Mac OS APIs, just as WINE does for Windows.

Builds and runs on modern 64-bit Linux and macOS (Windows support is planned).
Rootless - emulated windows are part of your desktop.
PowerPC support (well, not many Apps will run, but it's there)
Support for native Mac resource forks (Mac version)
Exchange files with Basilisk & SheepShaver
Lots of code cleanup, according to my own definition of "clean"
included debugger based on cxmon from Basilisk
started a test suite
Removed old, no longer functioning, DOS, NeXT and Windows ports. (Windows still works, though, via Qt and SDL ports.)
I probably broke lots of other things that used to work.

Anyone here have builds of this? I updated the "back pages" of the wiki yesterday, and would love to provide some links. We currently link to compiled versions of the original Executor, which are less than ideal.
Top

ClockWise wrote: ↑Fri Nov 27, 2020 1:09 pm Anyone here have builds of this? I updated the "back pages" of the wiki yesterday, and would love to provide some links. We currently link to compiled versions of the original Executor, which are less than ideal.

It's on my backlog list of things to do, but I haven't got to it yet. If someone else would do it, it'll probably get done faster.
Top

Actually, you might be able to try these out:

I don't know if the Mac OS X version is based on Executor 2000, but it seems to be pretty recent. I'll link to it in the wiki. Let me know if it runs okay on your end.
Top 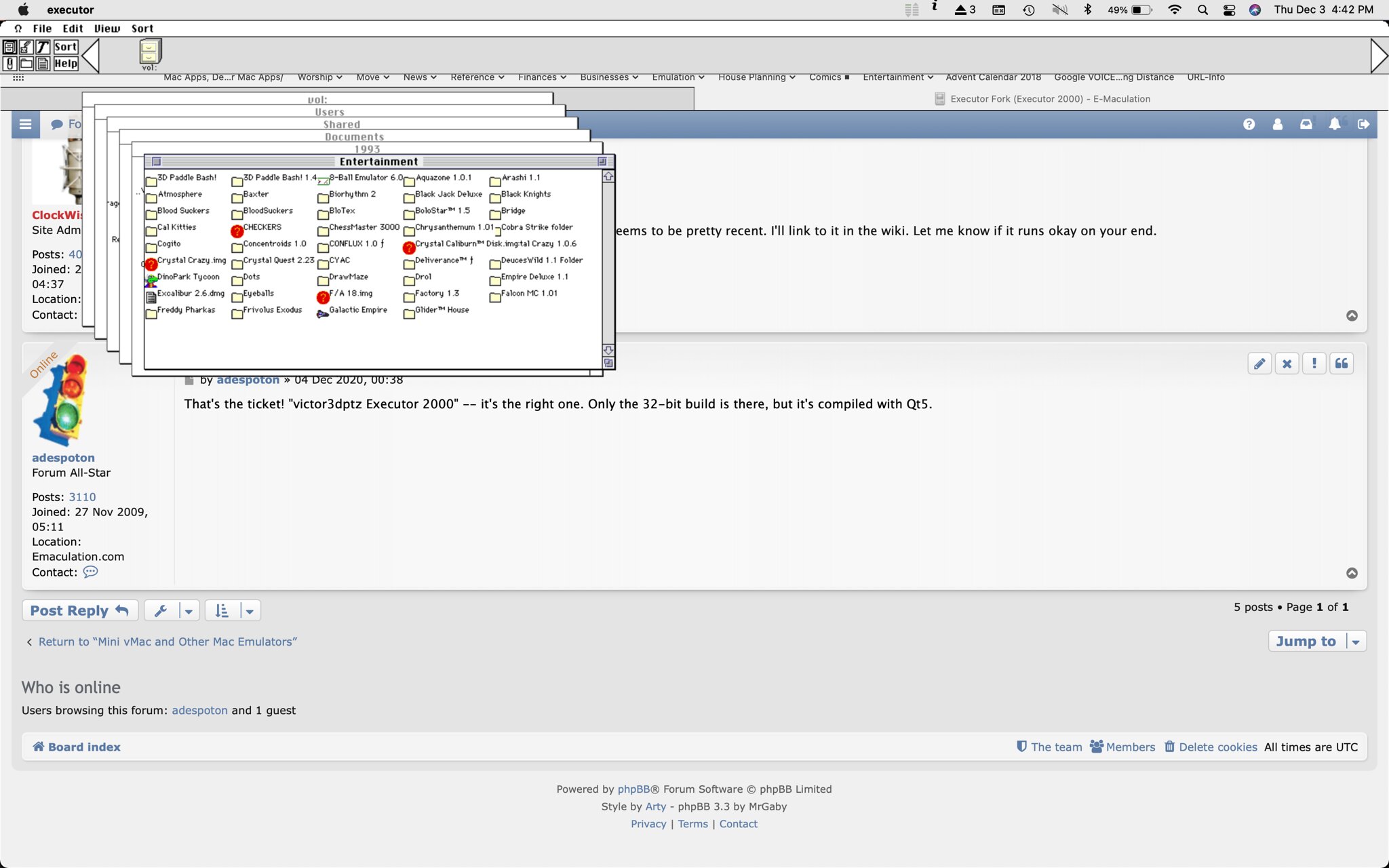 Are there any 64-bit builds of this?
Top

Not on that project... but the source is here if you want to try building 64-bit/ARM yourself:
https://github.com/ctm/executor
Top

Sad. It looks like it has a few dependencies that I’d rather not muck around with. Maybe when I find more time…
Top
Post Reply
8 posts • Page 1 of 1