After a bit of effort, I managed to install Mac OS 8.1 on a freshly created 650 MB SCSI disk image using the recently released Gemulator 2008 test build #1.

Gemulator now makes the Quadra sound at bootup! (An easy software hack.) The GUI interface is a bit cleaned up, though pretty much the same since ~2000.

Setting Gemulator to a different screen size before booting will reset the color resolution to black & white, as was always the case with SoftMac.

Before rebooting into the Mac OS, I moved the INITs shown in the screenshot below out of the System Folder as they are known to cause earlier SoftMac builds to lock up and I didn't want to play the rapid shift-key game to try disabling extensions during the microsecond of opportunity at bootup. Especially as most Windows versions will assume you're trying to turn on Sticky Keys during the frantic pounding on the shift key.

After getting to the desktop, the Mac OS 8 Setup Assistant failed to launch due to the File Sharing extension not being in the System Folder (I forgot to move the Assistant shortcut out of the Startup Items folder).

After removing the shortcut, I launched the Monitors & Sounds control panel to switch from the black & white screen to a color one. Then I made the mistake of ... trying to move the volume control to create a sound. This locked up Gemulator 2008 (9, 08-08-07, Test 1, whatever) faster than you could say "Emac".

End of the usability test.

All I see is the old GUI with a new title and a little side-show of a startup sound. I would have thought Darek would have disected the Fusion PC source code to get half a clue on how to implement sound by interfacing Mac Toolbox calls with the Win32 API, or whatever non cache-backwards, non-rolled out, big\little endien, code algorithms he's had years to research to make a functioning retail product.

Unfortunately, there's no new story here. Yet at least. Let's see some PPC emulation that can run MS Office 98\2001 and I'll be impressed. Or just get sound, networking, or printing working on 68k emulation and there would be a story (shock).

I was careful to make sure all emulators were setup with the same settings (including the Mac OS side's cache size, etc.) so none had an unfair advantage. Let's see who the winners are and loser was ... 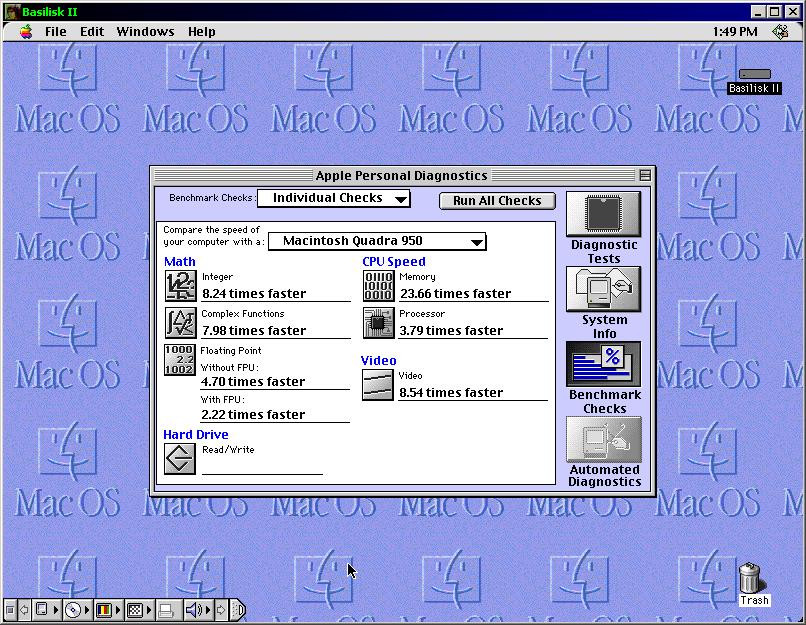 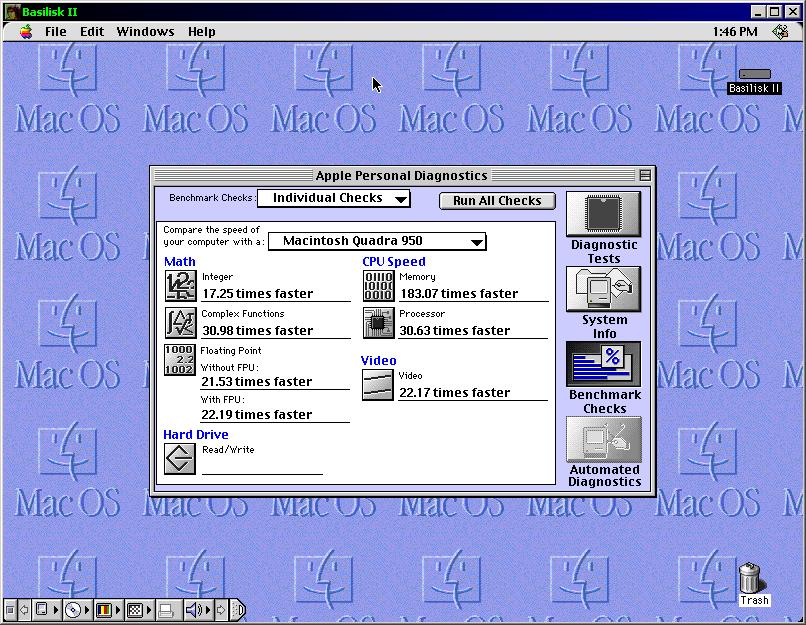 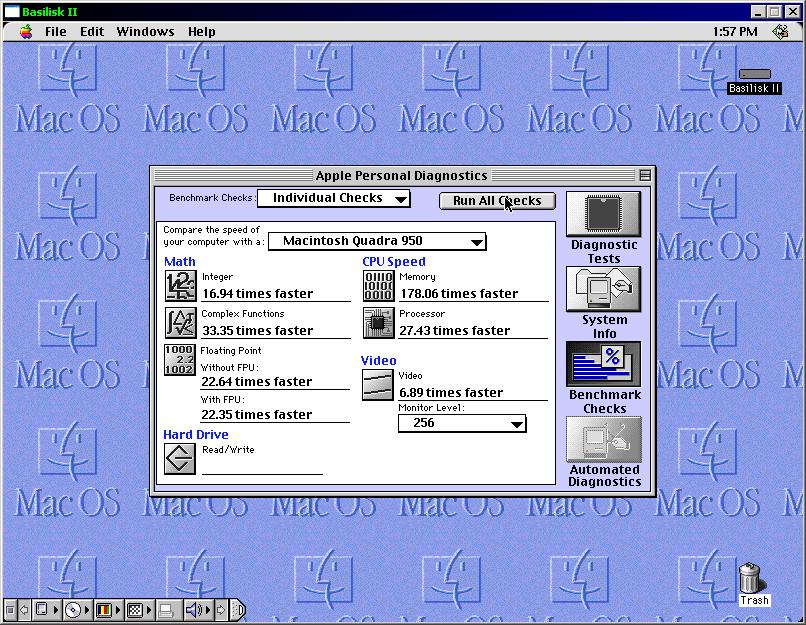 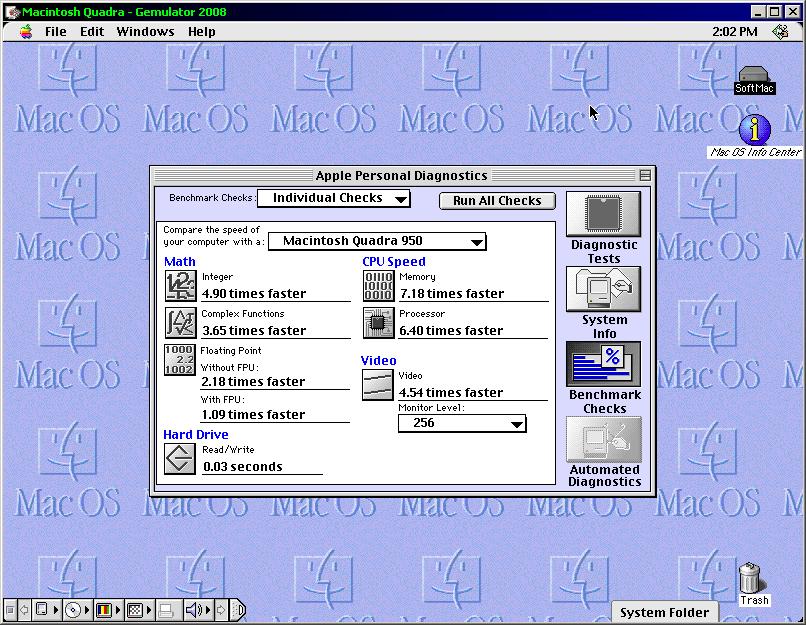 Hum, the non-JIT Basilisk II 0.9 B142 released at the beginning of 2001 thrashed the new Gemulator. Even SoftMac XP made Gemulator it's B17ch. The slowdown must be from the addition of the startup sound.

I cannot use Basilisk JIT on my Vista system because it refuses to display anything. I'm still sticking on old 0.8 by lauri pesonen.
I can only hope Gemulator can finally emulate A/UX one day.
Top

Didn't Darek once say that he would add an MMU to softmac if enough people asked him?

Maybe a future version of Gemulator will include an MMU.
Top

Yeah. Darek makes a lot of promises. He also had a PPC emulator back in 2000 that he only showed visitors of Comdex conventions in the back room. Five years ago we asked Darek to fully implement a MMU when he asked us what we wanted to see in future SoftMac releases.

SoftMac 2000/XP reports a MC68030 MMU when Mac tool programs probe for it (Fusion PC has a Mac II AMU, Basilisk II has no MMU). And there is a program called EPStoPICT that would refuse to install on Basilisk II due to the lack of MMU, but would install on SoftMac.

But Gwenole makes it sound like it would take a lot of time and effort to emulate a MMU and he didn't think it was worth his effort trying to implement it. Lauri used to say that Basilisk II could already use a Windows page file to allot more memory to Basilisk than was physically installed on the PC.

If a MMU was implemented for a 68k emulator, A/UX and Linux68k still couldn't work on it unless it used SCSI-based hard drive files (like SoftMac does). I and a few others have tried installing 68k-based Linux distros on SoftMac, but they choke.
Last edited by Mac Emu on Tue Oct 30, 2007 5:23 pm, edited 2 times in total.
Top

the SDL ver.
however the SheepShaver SDL released at the same time works in my Vista like it is running in XP.
Basilisk SDL only gives me a black screen (but there is sound).
Top

The current Basilisk II JIT for Windows is experimental according to Gwenole. It runs O.K., but the earlier port for Windows is faster and more stable than the newer builds (IMO).
Top

Thanks.
(in truth you only need a SDL.dll in order to run the newest basilisk or sheepshaver in the case you don't need the GUI)

Many of current Mac emulators(Basilisk, SheepShaver, Mini vMac) are not "real" emulators.
They don't offer a complete emulation of Mac's CPU-Memory system (lack of MMU, buggy FPU..)
They don't emulate real disk controllers, display controllers, sound controllers...they just patch the ROM and let the emulated Mac access the emulator's disk, CD, display, sound and other I/O devices. So, A/UX, any Unix-like OS (besides MacMinix), Toast, and many other apps that want direct access to the hardware don't work well with them.
The emulated Mac don't start as a real Mac. For example You can't press C when startup to let the Mac startup from CD, and in SheepShaver even you use a 4MB ROM you still can't access the Open Firmware console because the emulator directly go to the Toolbox.
Top

Yes, but you do need GTK+ to run the GUI configuration manager if you don't feel like editing the prefs by hand by memory.

Mac Emu wrote:Yes, but you do need GTK+ to run the GUI configuration manager if you don't feel like editing the prefs by hand by memory.

They are incomplete Mac emulators as is PearPC, Fusion PC, mini vMac, vMac, and especially S**tMac.

Is nobody have completely documented the sheepshaver_prefs file?
Top

Mac Emu wrote:Yes, but you do need GTK+ to run the GUI configuration manager if you don't feel like editing the prefs by hand by memory.

They are incomplete Mac emulators as is PearPC, Fusion PC, mini vMac, vMac, and especially S**tMac.

Pear PC is much more complete than SheepShaver.
and it will be perfect when it support the Newworld Mac's way to load Toolbox from disk so it will support Classic OS.
Top

For settings, maybe this page on my website is useful:
http://www.open.ou.nl/hsp/Engels/SheepS ... ttings.htm

And do you think any development will happen on PearPC to support OS 9? I seriously doubt that

(not saying it's not going to happen, though)

I'm aware running Mac OS X for Intel is possible on a properly equipped PC and on VMware, but I've never done it.

I'm aware running Mac OS X for Intel is possible on a properly equipped PC and on VMware, but I've never done it.

You need the OSX86 hacked version to do that.
Top

I run two hackintoshes, one intel C2D and one AMD 4400+. Both run flawlessly! I even build the latest SheepShaver intel build on the AMD and the latest PPC build using PearPC and Tiger on the intel machine.

I live in the U.S., so running MacOSx86 on a Hackintosh (or VMware) will summon the Apple Ninja Action Lawyers to silence me.

Mac Emu wrote:I live in the U.S., so running MacOSx86 on a Hackintosh (or VMware) will summon the Apple Ninja Action Lawyers to silence me.

I live in the country where everyone use warez.
Top

BTW: In case any developer was wondering, I can't benchtest the SoftMac 2008 Beta 1 because everytime I try going into Disk Properties, I get the following... 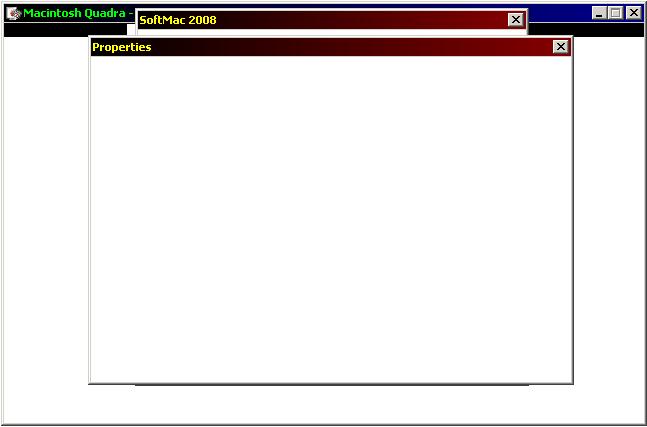 I will download SoftMac 2008 later and have a look.

EDIT: I download SoftMac 2008 and don't have that problem. I just have to find some disks to intall it properly with.
Top

I believe it's a bug in how the new Gemulator and SoftMac save their preferences.

Since I deleted the SCSI DSK image from my hard drive, now when I try changing the Disk Preferences in either the Gemulator Beta 1 or SoftMac Beta R1, both emulators hang. I imagine I'll have to use regedit to find the path\file entries so I can delete them.

I've been trying to run the gemulator beta, but I get nothing except that white screen that Jim illustrates here. What's up with that? I use the same setting that successfully boot in the 2002 softmac, but it don't work...
Top

To be specific: when I hit the "continue" button, I get the chime sound of the MacOS booting, but all I can see is a white screen in the window that the emulator is supposed to be running in.
Top

You get that problem resolved? I recently rehabilitated a computer I had back in late 07 and found a copy